On the 20th of May, the CER Arctic welcomed two guest presentations by researchers from the University of Lapland (Finland). Tanja Joona gave a talk titled "Reindeer herding and Tourism in Lapland – changes in traditional lifestyle". It was followed by Juha Joona's presentation about "Fishing rights in Finland. What do you think?"

Biographies of authors can be found here

Professor Françoise Breton has represented the CER ARCTIC of the UAB at the round table "The warming Arctic: geostrategy of the climate change". The activity took place on April 25 at the Collegi de Periodistes de Catalunya with the participation of Jerónimo López (UAM), Xavier Mas (La Vanguardia) and Francesc Mauri (TV3).

Comparing the Arctic and the Mediterranean 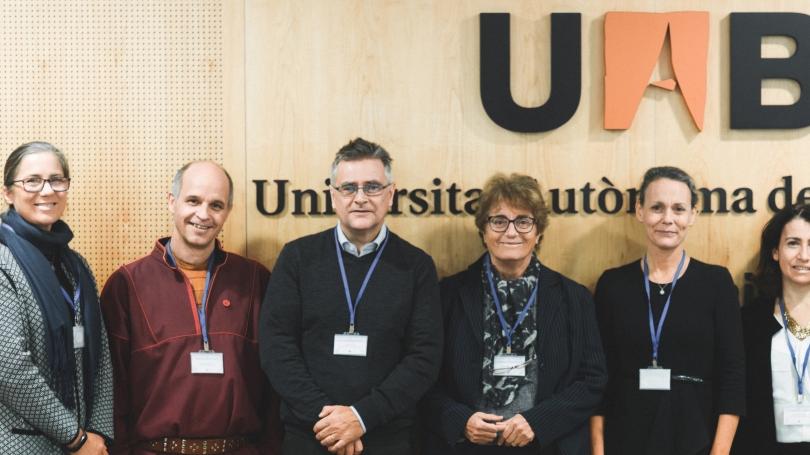 The staff of the CER-ARCTIC research centre in Barcelona, which focuses on comparative studies involving the Arctic.

Researchers at the CER-Arctic conduct comparative studies between the Arctic and other regions.

Researchers in Barcelona spearhead research on interregional comparisons by bridging the Arctic with other parts of the world. "We want to compare similar trends in different regions and connect small communities with similar problems, for them to share experiences and develop strategies for the future", Professor Françoise Breton, tells High North News.

Shared topics among communities in the Arctic and other regions concern colonial legacies and the challenges posed by climate change and globalization.

CER-ARCTIC will specifically conduct comparative studies of the Arctic, viewed as a sea surrounded by a diversity of countries and cultures, and the Mediterranean region. "Both share a high level of vulnerability to global changes, not only climatic, but also political, economic and cultural, with negative effects for local communities", Breton adds.

The two main social issues that CER-ARCTIC is comparing between the Arctic and other regions are maritime tourism and marine protected areas (MPAs).

Marine tourism is booming in the Arctic, with problematic social and environmental consequences, including for marine mammals and societies that rely on them. "The Mediterranean has a great deal of solid research, experience, and expertise to offer as how to cope with such developments", Prof. Breton says.

MPAs are quite rare in the Arctic but pressures of increasing exploitation, fishing, hydrocarbon extraction, shipping, and tourism activities are calling for robust and sustainable management arrangements. "This is also an area where there is much experience in the Mediterranean, and in other coastal regions such as Galicia, which can be of much value for governance design and implementation in an Arctic context", Breton elaborates.

"Additionally, we want to respond to societal and cultural Arctic needs, making more visible the small local (indigenous and non-indigenous) communities and their rights on land and ocean uses, on wild animals and the commons, which are the foundation of many Arctic cultural identities", Breton emphasizes. "We try to explore the transformations underway in the Arctic considering how people who live there and who consider the Arctic as their home are affected by global impacts including climate change."

"There are global phenomena such as tourism and urban changes which greatly affect local populations. That is why CER-ARCTIC will conduct responsible research, with priority research lines which will be agreed upon with the people living in these regions", Breton continues. She points to the fact that many countries increasingly see the Arctic as a "warehouse of resources" rather than "a territory in which people live".

CER-ARCTIC is planning several international Arctic events in 2019 to strengthen Arctic links with the South generally and the Mediterranean specifically.

The First International Conference on “Indigenous Peoples in Cold Climates”

The UAB’s Arctic Research Centre CER-ARCTIC, in collaboration with the Stefansson Arctic Institute in Iceland, the Arctic Centre of the University of Lapland in Finland, and the Sustainable Development Advisory Board of Catalonia (CADS) of the Government of the Generalitat de Catalunya, organised the 27th April the First International Conference on “Indigenous Peoples in Cold Climates”. The event took place at the Doctor Melcior Colet Museum and Centre for Sports Studies in Barcelona (Carrer de Buenos Aires 56).

The conference focused on experiences in social realities, marine and land rights, the "commons" and the relationships with nature among indigenous peoples and other communities living in the Arctic.